If you’re like me, you’ve always rolled your eyes at those people who seem to constantly be happy and positive about everything. I mean, that must be fake. There are just too many shitty things in life to be happy all the time. Those people must be putting on a show while they are secretly crying in their bedroom every night. Or, their lives just happen to be so perfect – supportive husband, job they love, enough money to do what they want, beautiful and fit – that they couldn’t possibly not be happy. They have it all! I would be happy if I had it all too! 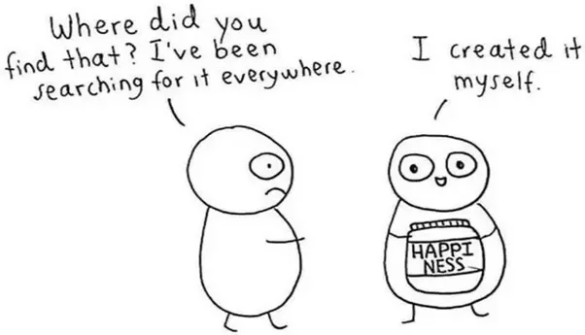 I’ve often seen this sketch floating around, and while I agreed with the concept, I couldn’t figure out how to make it a reality for myself. How in the world do you just create happiness out of nothing?! I was always waiting on some external factor to make me happy. Moving somewhere new, changing jobs, getting a boyfriend. Sure, these are all great things and can contribute to my happiness, but at the end of the day, if I didn’t change a few fundamental things regarding my mindset, I was never truly going to be happy. Meaning, if those things were stripped away from me and all I had left to face was myself, would I be ok or would I fall to pieces?

Here are a few things that I’ve started doing that have helped me immensely:

Did any of these things come naturally to me? Nope. Sometimes they still feel weird. When I first started doing them, I definitely felt like a fraud. Like one of those happy-go-lucky people that I used to despise. But now I’m starting to think that maybe they are on to something. Maybe being so happy and positive all the time is what has attracted awesome things to them, rather than the other way around. Maybe they really did create their own happiness. Maybe, like me, they adopted a “fake it till you make it” approach, and it manifested into something real.

How do I know it’s working? Well for one, I smile and laugh more often, just because. Secondly, the other day something happened to me that would have upset me to my core. Something that in the past would have had me in tears, then turned to anger and finally resentment. But this time around, there were no tears. There may have been some initial anger, in fact my body started shaking involuntarily at first, almost like I had been so programmed to respond in a certain way that my body took over. But for the first time in my life, I was able to look at the situation with a clear head and not let it affect my state of mind. And by refusing to let it bother me, by refusing to get involved, I found peace.

This is still a work in progress but I know I’m on the right track. So cheers to finding your inner happiness! And to the awesome things that it will bring into your life.

One thought on “Fake It ‘Till You Make It”