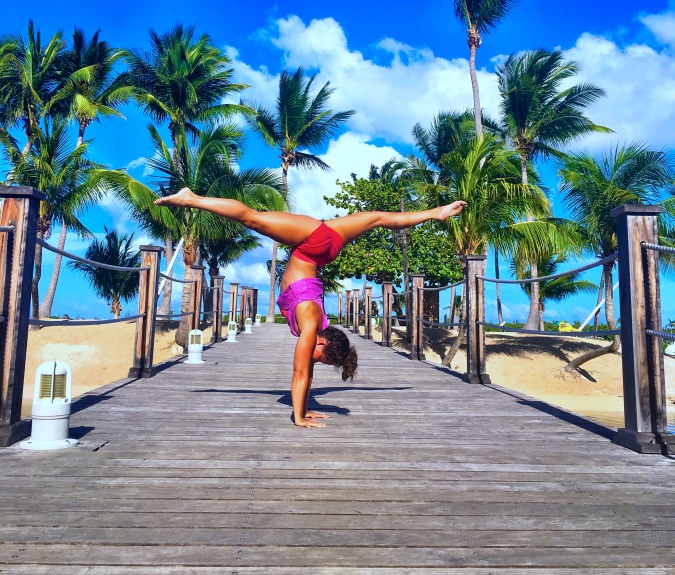 Almost seven months ago, I made the decision to move from the crowded, concrete jungle of Manhattan to the tiny, tropical island of Grand Cayman. Is this where I envisioned myself living at the age of 30? Not at all. I mean, who gets to just drop everything and go live somewhere beautiful by the ocean? You could say lucky people. Or you could say people who are granted an opportunity and seize before it disappears.

You only live once, right?

The friends from New York that I’ve spoken to since moving here seem to be divided into two groups. There are those who envy my move. Who tell me they long to leave the city for a simpler life full of warmth and sunshine but can’t bring themselves to do it, whether because of family, friends, jobs, fear – everyone has their reasons. Then there are those who ask me when I’m moving back. Or how long my pretend life is going to last. Those are either the people who can’t imagine a life, at least not permanently, outside of New York City, where you can literally have anything you want delivered to you within seconds. Or the people who can’t imagine life outside of the US, where endless opportunities await (although in light of recent events, there might be less of those people now).

I understand both perspectives. I was that person who was scared to leave New York. I had a great job, great friends, and wasn’t sure what I would do with myself if I suddenly had enough time to sleep 8 hours a night and maybe even have some down time every once in a while. More than that, I was scared of missing out. If I didn’t live in New York, I wouldn’t be given the same media opportunities or receive free Nike or Reebok shoes. But were those things really adding value to my life? Were they enough to make me happy in a city where I had started to feel so alone despite being surrounded by so many people?

When I took a step back and examined the things that were keeping me in New York versus the things I stood to gain by moving to Grand Cayman, I knew I had to make the move.

This post is by no means meant to be a bash on New York. I love they city and I loved living there. I miss my friends, my clients, the convenience, the energy, the randomness, the endless food options, the sense of community. There are days where I see cool things happening at my old job and wonder if I made the right decision. I think, aw man, I wish I was a part of that. But then I think about what I have here, the new friends I’ve made and community that I’ve found, and remember that the grass is always greener.

I can’t say for sure how long I will stay here. Just like when I moved to New York, I would not have been able to tell you that I would end up living there for seven years.

We have no way of predicting where life is going to take us, and if we set a rigid path and don’t allow ourselves to tread off of it, I think that we can end up pretty unhappy.

I’m 30 years old, and I don’t intend to wake up when I’m 40 and wonder about the opportunities that I let pass me by. I have my ups and downs, just like anyone, but I’m happy. And I feel like I’m making a different in people’s lives. And for now, that’s enough for me. If those two things change, then I’ll know it’s time to reassess.

So, you may be wondering, how is life different in Cayman than in New York (aside from the obvious change in climate)? To name a few…

Life is simpler. When you move somewhere new where you don’t know anyone and have no history, life immediately gets way less complicated. It’s kind of like having a clean slate, or starting over, both physically and mentally. For starters, I moved here with two suitcases. That’s it. So I have way less clutter, and I’m making it a point not to accumulate tons of random crap again. It also helps that when it comes to shopping, we are basically cut off from the rest of the world. Not that I was ever a big shopper, but I can’t walk down the street and wander into Nike or Lululemon and spend money on yet another sports bra, and I can’t have things shipped to me without paying exorbitant amounts of duty. And that’s ok! I’m learning that there’s more to life than having the latest pair of training shoes…who knew?! On the mental side, I feel like I have a clear head here. Maybe it’s from leaving the chaos of NYC, maybe it’s something about being near the ocean, but I feel like things that would have really upset me before just don’t bother me the same way here. That’s not to say that I’m happy all the time – I definitely still have my moments – but I’m able to move past them easier, whether that’s finding a solution to the problem or just realizing it’s not a big deal and moving forward.

I read more books. This kind of goes along with the clear head things. When I was living in New York, I rarely read. I might go through stages, but I was so tired all the time that reading usually put me to sleep, or I just wasn’t able to focus on whatever it was I was reading. My mind was all over the place. I have read 15 books since moving to Cayman last July. That count would probably be even more had I not stopped to watch a few shows on Netflix like Stranger Things and the OA). I mostly read fiction, but who cares, I’m reading more, which is something I always loved to do, and that makes me really, really happy.

I have to drive places. For the first time since college, I own a car. I actually love driving. It was one of the things that I really missed while living in NYC. Traffic sucks, yes, but at least I can sing at the top of my lungs in the privacy of my own car – something that you can’t do on the NYC subway without getting some death glares. We do drive on the left side of the road, which takes some getting used to, but I actually adapted much quicker than I thought I would. It helps that I sit on the right hand side of the car when driving.

I’m not sleep deprived. This is a HUGE one for me, and probably the change that has impacted me the most. I was ALWAYS tired in New York. I know there are people who say that they can survive on 5 hours of sleep per night, but I am not one of them. My mood sufferes, my workouts suffer, my immune system hates it. And honestly, I think the people who say they are ok with just a few hours of sleep per night are so used to be sleep deprived that they don’t remember what it feels like to not be tired, that’s just their state of being, and they’ve come to accept that as normal. I digress. At our gym, we have AM and PM coaches. Being a PM coach, I coach in the evenings and book personal training sessions starting around noon, so the mornings are mine to do as I please. I typically go to bed around 10pm and wake up around 6am (in New York my wake-up call was usually 430am and I was lucky if I got to bed before 10).

I’m no longer Vitamin D deficient. This one doesn’t really need any explanation. And I don’t think I was Vitamin D deficient before, but a little sun definitely does a body good. I also don’t get sick as often, and if I do, I’m able to get well a lot faster because I’m not cooped up in my apartment while it’s 20 degrees outside. I try to make it a point to get out the beach at least 2x per week, even if it’s just for an hour, because what’s the point of living on a beautiful island if you don’t take advantage of it, right?

I cook more. This is definitely something that I could have made more of an effort to do in New York, but the endless food options available basically 24/7 made me super reluctant to cook my own food. Here, I don’t have much of a choice. There are some pretty good restaurant options, but they don’t always have idea hours and they aren’t all the healthiest of choices. I will say that groceries are just as expensive here as in NYC (no Trader Joe’s here), but just like anywhere, if you shop smart you can figure out how to not break the bank on food.

I’ve learned how to be patient (well, kind of…). Coming from a place where everyone is always in a rush, and everyone is go, go, go all the time, an island with the mindset “what’s the rush?” can be a frustrating place to live. Checking out the at grocery store, cashing a check at the bank, going to the DMV, driving through town, waiting for your check at restaurant, to name a few, are all things that have the potential to cause a panic attack on a daily basis. However, I’m learning to accept it. Everyone always says that New Yorkers are angry and rude, and I always thought that was an untrue stereotype. However, after being away for 3 months and returning, I found some truth to that statement. Not that people were necessarily angry and rude, but people do tend to have a sense of self-importance and “get out of my way” attitude that you just don’t find here. People here take their time doing things. Which can be frustrating when you need something done IMMEDIATELY, until you sit back and realize that nothing is actually as urgent as we make it out to be (assuming we aren’t talking about a medical emergency). Things will get done when they get done, and I’m learning to accept that. I still catch myself in that old mentality sometimes – I need this and I need this NOW! – but I’m usually able to catch myself and calm down, whereas before, I would have let it ruin my whole day and whined about it to anyone that would listen.

I guess those are the major differences. I am the same person, despite living in a different country. I l still love to coach, training is still a huge part of my life, and I still love ice-cream (thank goodness they have Ben & Jerry’s here). I just have a much better tan now.